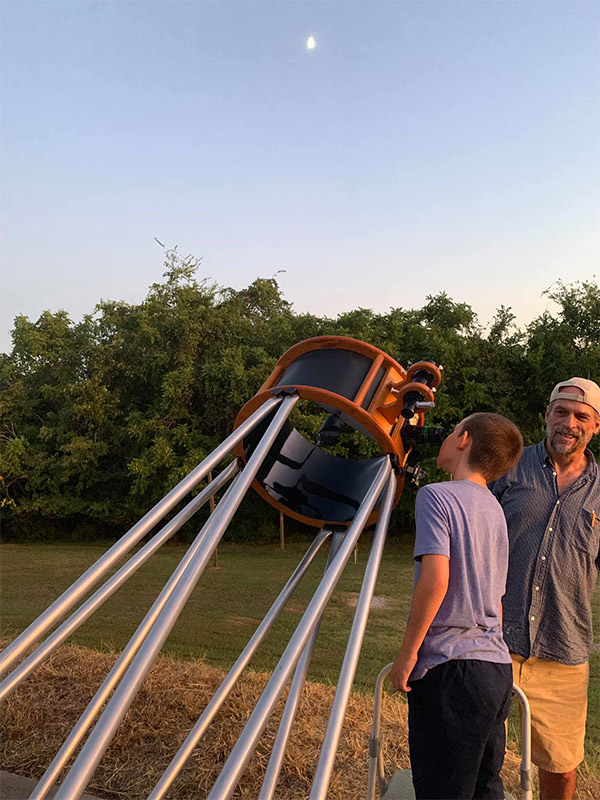 John Jaruzel, who donated the powerful telescope shown to Roane State’s Tamke-Allan Observatory, helps a young visitor get acquainted with the device.

An eight-foot-tall telescope with an 18-inch diameter lens has been donated for use at Roane State's Tamke-Allan Observatory, and it offers the clearest views yet of the universe's distant reaches.

Like the two powerful telescopes already in place at the observatory, the latest telescope is a donation, this time from former long-time Alaska resident and avid amateur astronomer John Jaruzel, who now calls Oak Ridge home.

"It is by far the most powerful telescope (at Tamke-Allan) in terms of collecting light," said Dr. David Fields, director of the observatory. "This scope will enable the viewer to see extremely dim stars and objects," he said.

"This is a wonderful thing to be able to offer the students views of such distant celestial objects," Fields said of the gift. "It's inspiring."

Fields said Jaruzel contacted him to offer the donation, and the telescope was installed in early September. "I hope the telescope enhances many dark nights of viewing for members and guests to ORION's gatherings," Jaruzel said. The donation is under the auspices of ORION, an organization whose members will primarily operate the telescope at the observatory.

ORION is the acronym for Oak Ridge Isochronous Observation Network, and Fields is the current president. He said it's "one of the longest-running membership science organizations in Oak Ridge."

He said the 18-inch diameter mirror is fully 144 times the diameter of the pupil of the eye. "This means that the images are over 20,000 times brighter than if seen by the unaided eye."

The Tamke-Allan Observatory is on a ridgetop overlooking Rockwood and Watts Bar Lake at the end of a one-lane, winding road.
It's the only observatory that's a part of Tennessee's community college network and it is available to Roane State students through a two-semester astronomy course as well as to the public.

Public stargazes are offered free twice a month on the first and third Saturdays, beginning at 7:30 p.m. The observatory is off Caney Creek Road, less than four miles from the college's Roane County campus on 276 Patton Lane, Harriman. Maps and directions may be found at the observatory website, www.roanestate.edu/obs.

Light pollution is the nemesis of stargazers, Fields said, and the relative remoteness of Roane State's observatory is a help. Still, Fields said efforts are underway to minimize light pollution, and he's urging Roane County utilities to convert from "mercury vapor lights that shine in all directions, to long-lived LED lights that point downward." Besides, he said, the conversion to LED lights would quickly pay for itself.

A special daytime event is coming up on the morning of Nov. 11. That's when the planet Mercury will transit across the face of the sun. It's the last time that astronomical event will be visible from the eastern United States until May 2049.

Astronomers and students are planning to convene at the observatory at 7:30 a.m. (EST). Those interested should bring telescopes, solar filters and eclipse glasses. Special telescopes will be set up to safely watch Mercury's transit, Fields said.