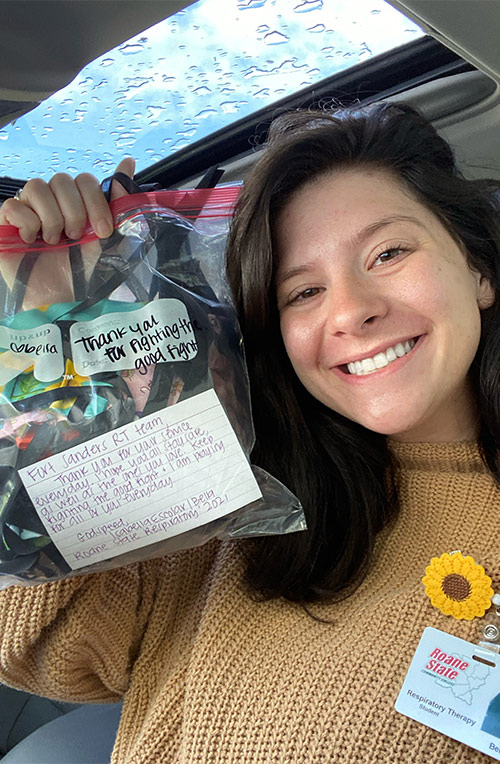 Roane State respiratory therapy student Isabella Escolar had never used a sewing machine before March 27. She didn’t even know how to thread a machine’s needle.

But she learned of the need for protective face masks for respiratory therapists at Fort Sanders Regional Medical Center, where she went for her clinic rotations before COVID-19 shut those lessons down.

Escolar said she’d developed a special bond with the hospital’s respiratory therapists during clinicals. “I said I had to do something,” she recalled.

So she called her grandmother, Marcia Butts, and surprised her with a request to borrow her sewing machine.

What followed were 12 hours of initial frustration as she taught herself how to sew by watching YouTube and getting tips from her grandmother and boyfriend Ben Miller’s mom, Katie Helms.

Now, Escolar says she has a new hobby – sewing – and she’s made nearly 250 masks, with the initial 38 delivered to her Fort Sanders friends. A mask with a special pocket for inserting a filter takes about 45 minutes to put together, she said.

“My masks are going everywhere,” she said, adding that she’s received donations to buy more material.

Escolar said her masks are made of quilted fabric, which she said a Google search revealed was the most protective material outside of the N95 respirator masks. Her ear pieces are made of a flat piece of braided trim called rickrack, along with bias tape to make them stretch more. She used her boyfriend’s face as a template for men’s masks.

Escolar is acutely aware that she’s studying for an occupation that has suddenly become extremely dangerous, but the pandemic has only made her eager to join efforts to contain the deadly virus. She said there are only 150,000 respiratory therapists in the U.S.

“With all these sick people, we need more respiratory therapists now,” she said, noting those therapists operate the ventilators that are much in demand.

“It’s a little scary,” Escolar admitted of the pandemic and the prospect of joining the front lines in the battle to contain the virus and heal those afflicted. “Anybody who says they’re not scared is probably lying.”

“I can die doing anything,” she said. “You take chances everywhere you go – driving a car, flying in a plane.”

Escolar, 27, has a 5-year-old son and is a recipient of the Tennessee Reconnect grant which covers tuition for older students returning to community colleges. She said at first she was unaware of the roles of respiratory therapists, but she knew she wanted to specialize in healthcare.

She said she watched a video on YouTube about respiratory therapists, “and that did it. It was game over for me. I applied for the Roane State program and got in.”

“Isabella is an example of how respiratory therapists show compassion, not only for patients but for each other in times of need,” said Lesha Hill, director of the Roane State program.

“If anybody needs a mask, I’ll be more than happy to help,” said Escolar, formerly of Oliver Springs and now a Knoxville resident. Her email: escolarim@roanestate.edu.