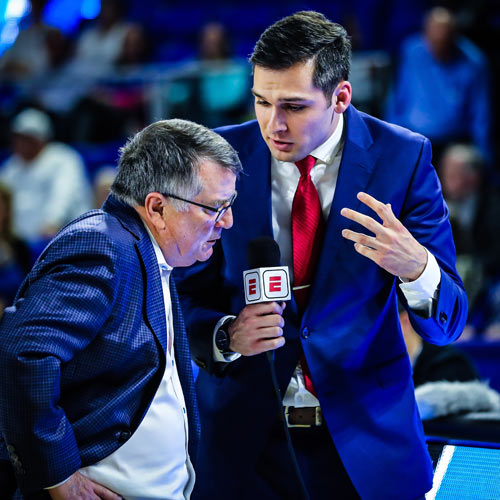 After first attending a university, Alex Myers came home to Roane State, and he says that move helped him “connect the dots” and break into television journalism.

Now, he’s a full-time employee of WBIR-TV in Knoxville with the title of visual storyteller, and his responsibilities are growing as he develops even more expertise in shooting videos, editing and reporting.

“I grew up watching WBIR and to be able to work for that station has given me a sense of pride,” the Oak Ridge resident said. “It’s a blessing that’s hard to put into words.”

There were some roadblocks and detours along the way, Myers said. He graduated from Oak Ridge High School in 2012 and enrolled in the University of Tennessee at Chattanooga that fall. “I wasn’t a bad student,” he says, “but I wasn’t an ‘A-plus’ student either.”

“I never loved the ‘school’ aspect of school, but I knew it was something I needed to do,” he explained. After deciding to leave UT-Chattanooga, he enrolled the following fall at Roane State.

“Roane State was the place where I figured out what it took (to succeed),” Myers said. “But it wasn’t 100 percent smooth sailing. I learned I had to study and put in the extra time. I struggled and it was tough. I knew it was something I needed to do, and I made myself stick with it.”

“When everything didn’t go perfectly, Roane State gave me a chance to find myself academically,” Myers added. Roane State’s smaller class sizes were a benefit, and the communications courses he took “brought some insight,” he said.

Dr. Matt Waters, associate professor of communications, played a key role in helping him find his way, Myers said. “He was really great and he clearly cared. He went above and beyond, and I needed that.”

Myers said he received his first paycheck in the broadcasting business from a 30-second commercial he made for a Louisiana firm with the skills he learned in Waters’ communications class.

Because of his initial experiences at the community college, he said he was able to say that he’d broadcast college athletics.

After graduating from Roane State with an associate’s degree, Myers enrolled in Middle Tennessee State University, where he graduated with a bachelor’s degree in communications. While there, he did commentary at basketball and football games for the ESPN family of networks.

Myers was at first hired to a part-time position with WBIR-TV and covered high school football along with doing interviews and writing scripts for broadcasts and the station’s website, www.wbir.com.

He was promoted to a full-time position as a visual storyteller in February, and his coverage responsibilities increased amid the COVID-19 pandemic.