>
About Roane State>
Public Relations>
News>
News: Student on target to graduate from ETSU after returning to Roane State

News: Student on target to graduate from ETSU after returning to Roane State 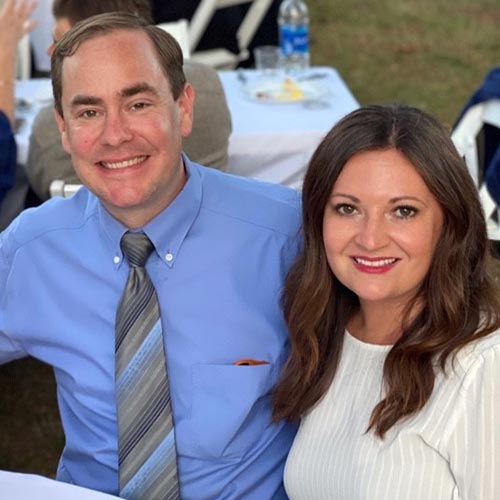 Roane State student Trey Howard credits his wife, Jessica, for suggesting that he should return to college.

Going back to college in his late 30s was his unique version of a mid-life crisis. That’s what Trey Howard and his wife, Jessica, say jokingly of his decision.

His return to the collegiate scene was Jessica’s idea, “and I definitely have her to thank,” said Howard, 39. He recalled that after a tough day as a salesman of industrial products, his wife asked a life-altering question: “Had I ever thought about going back to school?”

He’s on target to graduate from ETSU and finish his Roane State classes in December 2021. That should open up doors to several employment options; from medical sales, to working for companies that make X-ray machines, to perhaps a job at Oak Ridge National Laboratory. “I’ve always been interested in the science of X-rays,” he said.

Howard started community college after graduating from Bearden High School in 1999, but quickly decided he’d rather join the work force. “I was in the service industry and thought I’d make a career out of it,” he said. He worked in the restaurant business in Florida and Texas for several years before making a career change.

After deciding to go back to college, he enrolled in Roane State in the fall semester of 2017 with the goal of entering the college’s competitive radiological technology program. “There was no guarantee I would get in,” he recalled.

To qualify, Howard had to take some tough classes – anatomy and physiology I and II, and probability and statistics.

That’s when Roane State employees provided invaluable help, he said. Susan Pearson, interim director of academic advising, “helped me set up my course plan,” he said. Then, when he came back to Roane State this fall, “she helped me with registering. She is amazing.”

Howard said Robin Leib, director of the Learning Center on the Oak Ridge Branch Campus, organized study groups for anatomy and physiology students. “There’s no way I would have made straight A’s without her help.”

He said his instructor in anatomy and physiology, Dr. Pamela Siergiej, “is a great teacher. She’s very tough but very good.”

He enrolled in the rad tech program in the fall of 2018 and by then, the Tennessee Reconnect program was in effect and that enabled him to attend classes tuition-free.

“The health care field of study is very strong at Roane State,” Howard said. “I prefer in-person classes, but I’m getting used to [online courses],” he said of his current classes at Roane State and ETSU. “It’s better than not going to school.”