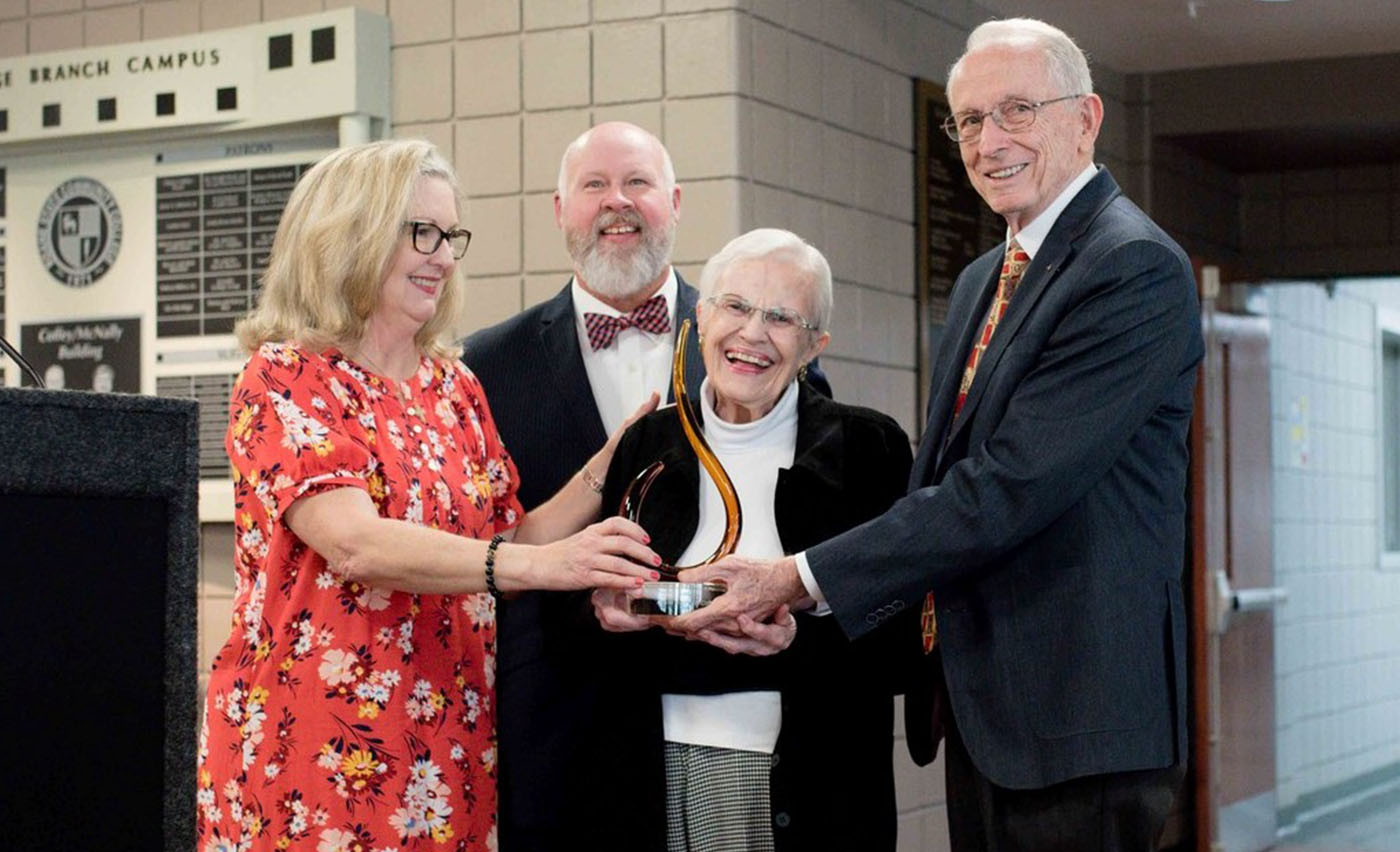 Photo: At left, TBR Regent Danni Varlan presents the 2022 Tennessee Board of Regents’ Award for Excellence in Philanthropy to David and Pat Coffey, first and second from right. Second from left is RSCC President Dr. Chris Whaley.

If not for David and Pat Coffey, there might not be a Roane State Branch Campus in Oak Ridge.

That’s the assessment given by Dr. Chris Whaley, president of the community college, during a brief ceremony to pay tribute to the couple.

The awards are for “visionaries, statespersons of the community and regional leaders who give generously of their time and resources to TBR institutions or the TBR system,” Whaley said.

The couple’s generous contributions to the Oak Ridge campus – the first branch campus in the network of Tennessee community colleges – have spanned 30 years and are continuing, said Danni Varlan, three-term appointee to the TBR. She presented the couple with the award, a graceful glass sculpture.

The husband-and-wife team personally gave the largest, noncorporate donation to the campaigns to build and equip the Oak Ridge campus, Varlan said.

The Coffey name – along with that of Lt. Gov. Randy McNally – grace the main building, a 118,000-square-foot structure. The Coffey name also adorns the library within the Coffey/McNally Building.

During the ceremony, David Coffey and Lt. Gov. McNally reminisced about the legislative challenges they faced in securing funding for the building and how then-Governor Don Sundquist at first fooled them by saying that an appropriation wasn't in the budget. At the time, David Coffey was serving a 10-year stint as a state representative.

Varlan said the Coffeys and McNally “are about civility and leadership. These men, this woman are servant leaders.”

Varlan said the Coffeys “believe in higher education and worked for more than 20 years to realize their dream of a branch of Roane State Community College in Oak Ridge.”

When grassroot efforts to help build the Oak Ridge campus began, David Coffey stepped up to co-chair the fundraising committee. That group raised more than $4 million to help construct the building.

Once that construction work started, Coffey and the committee raised $1 million needed to equip the building. The community celebrated the opening of the facility in August 1999.

The couple then personally contributed funds to establish an endowment through the Roane State Foundation to benefit the campus’s areas of greatest need on a permanent basis.

Today, the endowment named in honor of then-RSCC president Sherry Hoppe has a balance of more than $1 million.

In 2004, with student population growing, the Coffeys supported the capital campaign for the new 65,000-square-foot Goff Health Sciences & Technology Building with another lead gift.

The couple’s total giving puts them at the top of the list of supporters of Roane State’s Oak Ridge Branch Campus.

The Coffeys are strong supporters of higher education scholarship programs at the Roane State Foundation and beyond, Varlan said. They provide scholarships every year to deserving Roane State and Pellissippi State Community College students in memory of their son, Steven L. Coffey, who died in a plane crash in July 1995.

“Their generosity and support of their community is immense,” Varlan said, “but everyone that has ever met the Coffeys will agree that their genuine kindness and humble demeanor are even greater."

“They are the epitome of gentleness, grace, and servant leadership.” 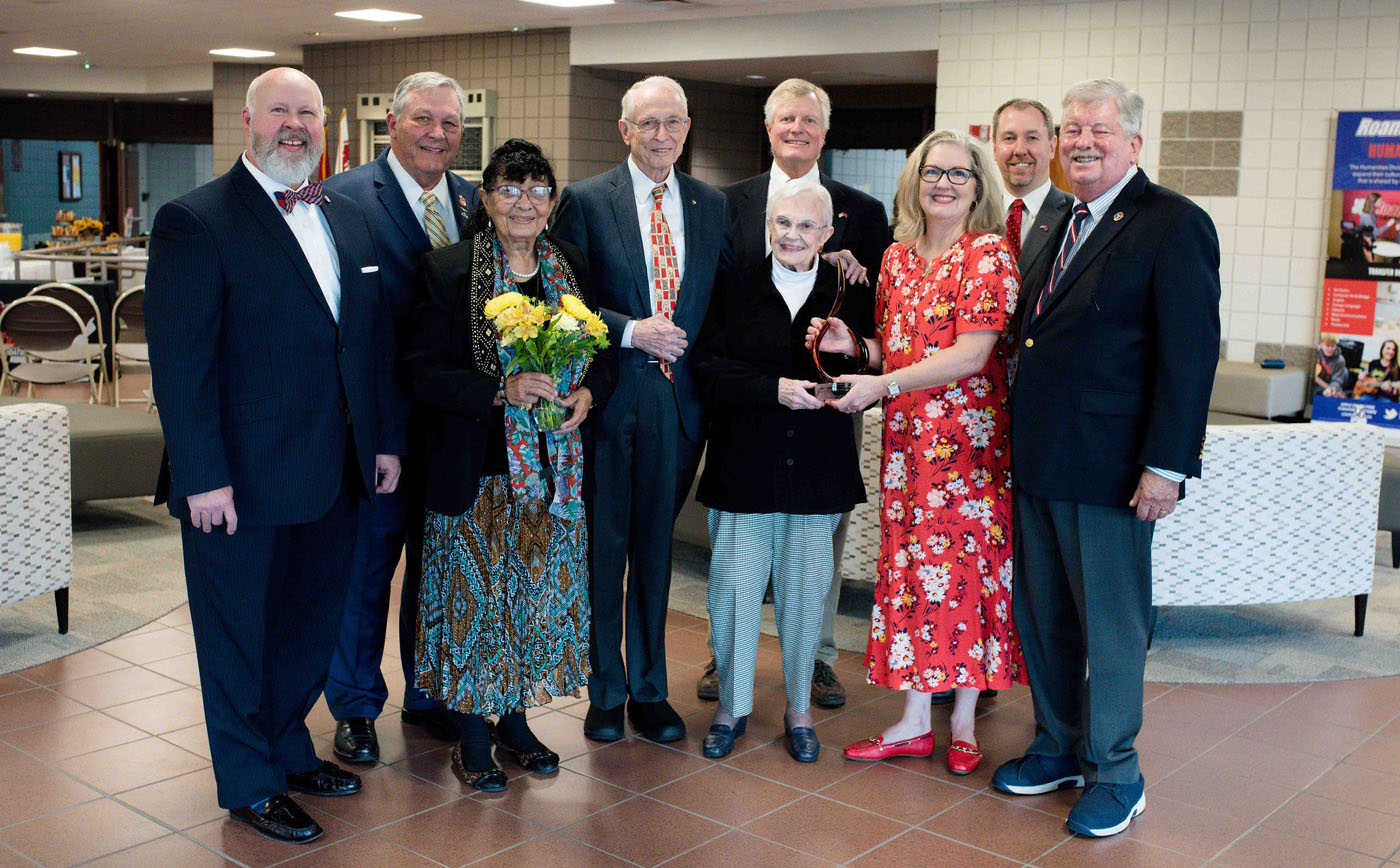 Roane State Foundation is a separate 501(c)(3) corporation governed by an independent board of directors and established to provide financial support for Roane State students and programs. The Foundation seeks to enhance community awareness of the college, to secure private contributions and bequests and to manage monies or properties given to the Foundation. For more information, visit roanestate.edu/foundation or email Foundationdept@roanestate.edu.