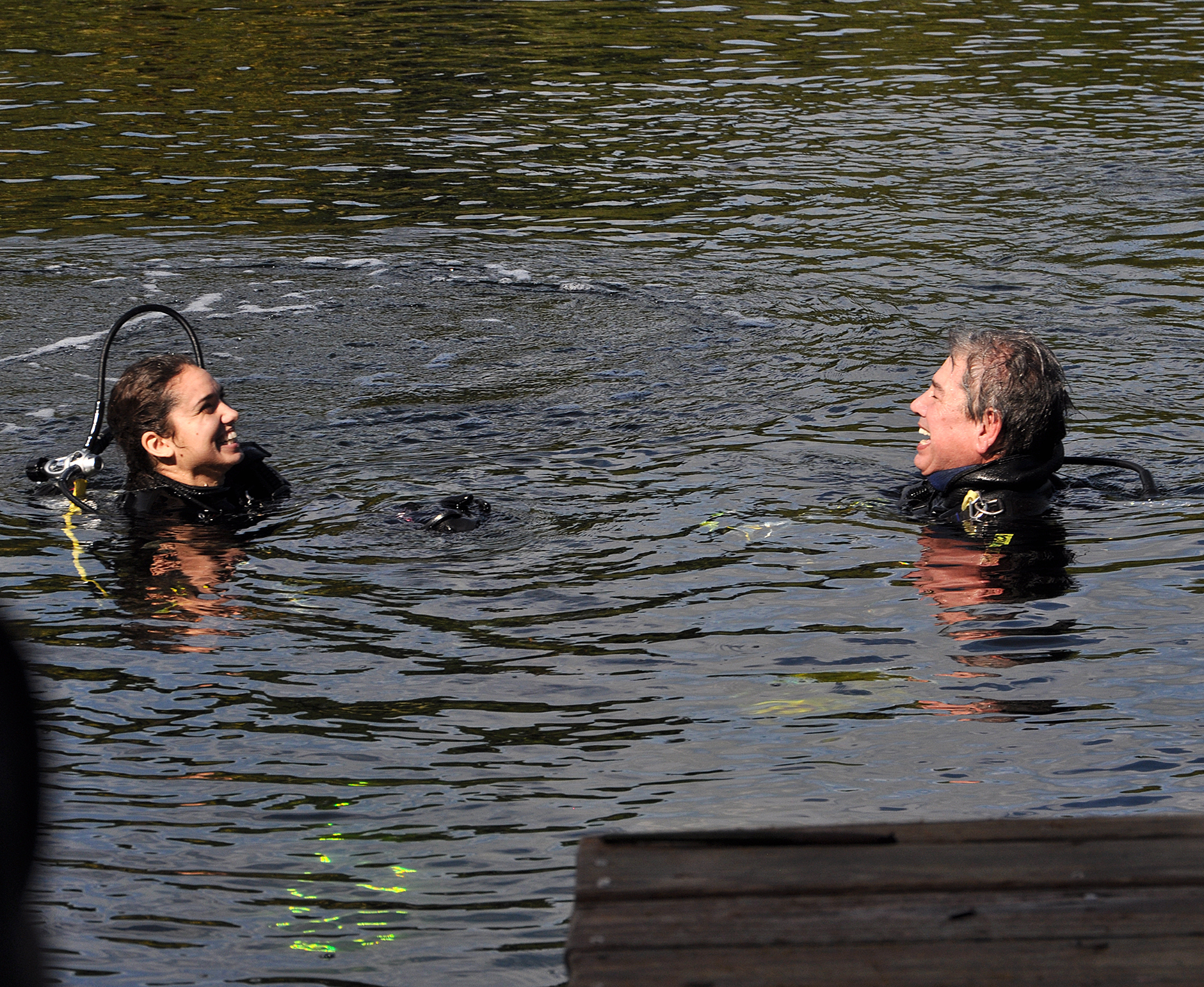 They also celebrated the end of their mission to educate the public about ocean conservation, to inspire young people’s interest in science and to make history.

“There is a sun,” Cantrell said with a laugh as he and Fain broke the surface of the water.

“Going in, we had goals that we wanted to accomplish,” Cantrell said.  “At the end of 73 days, I think we’ve exceeded those goals. We’ve reached a lot of people. Now the challenge for us is to carry that forward.”

Fain said that teaching people about ocean conservation was one of the project’s most important goals.

“I really hope that people take away from this that the oceans are something that we need to protect,” Fain said.  “We need to learn more about the oceans and how they work.” 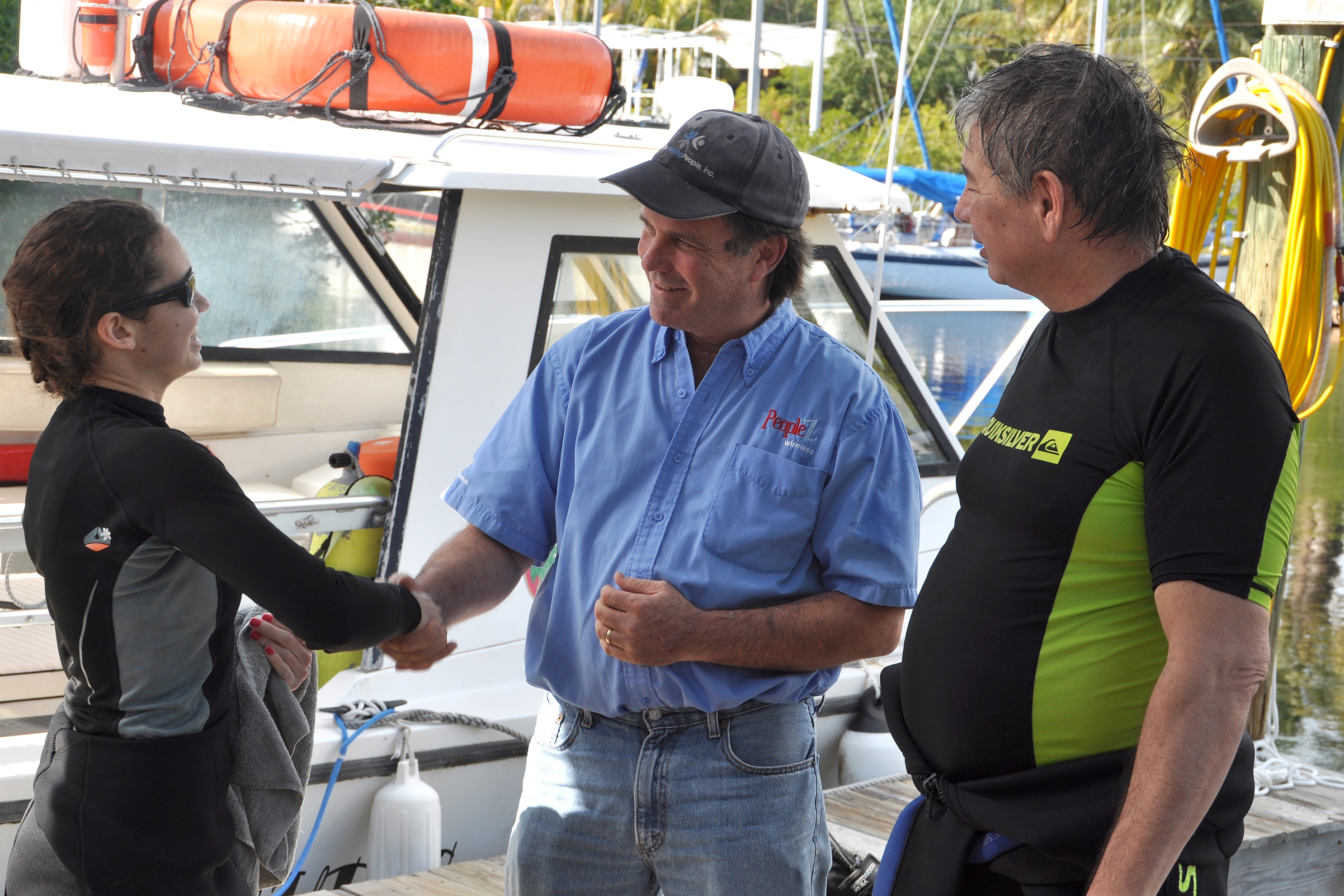 Their mission broke the record held by Richard Presley (69 days, 19 minutes in Jules’ Undersea Lodge from May 6-July 14, 1992). Presley greeted Fain and Cantrell after they surfaced.

“It’s exciting to see the focus more on education and using technology to involve more students,” Presley said. “We didn’t have that technology in ’92.”

Cantrell and Fain also spoke by video chat with students across the country and around the world. Students at a small school in Nickelsville, Va. shared their thoughts on talking with two professors living underwater.

“Our school is a very small school; we don’t even have 300 people,” wrote senior Chelsey Stapleton. “So getting this chance to talk to Bruce and Jessica about their experience was so interesting and amazing.”

Marine Resources Development Foundation and Jules’ Under the Sea Lodge arranged for middle school students and high school students to have “Lunch with the Aquanauts.” Thirty students participated, including groups from Massachusetts, Maryland and North Carolina.

Cantrell and Fain also received dozens of letters from students.

“When you start hearing back from these students, and they’re telling you ‘this is so cool’ and ‘what’s it like living underwater,’ you really feel like you are reaching your goals,” Fain said. “You feel like you are making a big difference in their lives. We brought a whole new world to some of these kids.”

In addition to hosting shows and speaking with students, Cantrell taught a college-credit course — BIOL 2600: Living and Working Under the Sea — for Roane State students.

Fain made her own mark by breaking the record for a female living underwater. The record was 14 days, set in 1970 by scientist Dr. Sylvia Earle and her team during their stay in the Tektite habitat. The Tektite program was the first nationally sponsored effort to place scientists in the sea to live.

“It’s a great honor,” Fain said. “She’s a pioneer. She’s a great marine biologist. By me living underwater for 73 days, I’m making a big step for females and showing girls, especially young girls, that it’s OK, that this may be a field where there’s a lot more guys, but girls can definitely succeed.”

Classroom Under the Sea episodes and lesson plans will remain available, at no cost, on the project website, www.roanestate.edu/classroomunderthesea. Teachers are invited to use the materials in their courses.

Tennessee’s Community Colleges is a system of 13 colleges offering a high-quality, affordable, convenient and personal education to prepare students to achieve their educational and career goals in two years or less. All colleges in the system offer associate degree and certificate programs, workforce development programs and transfer pathways to four-year degrees. For more information, please visit tncommunitycolleges.org.

Located on Key Largo in the Florida Keys, the Marine Resources Development Foundation is a nonprofit organization with the goal of developing a better understanding of Earth's marine resources. For more information, visit www.mrdf.org.

Jules’ Undersea Lodge was the undersea research habitat called “La Chalupa,” which Marine Resources Development Foundation operated from 1971-1976. Several missions were conducted in the habitat, including two at a depth of 100 feet. In 1986, the habitat started a new life as Jules’ Undersea Lodge, which is the only underwater hotel in the world and accessible to any recreational diver. Learn more at www.jul.com