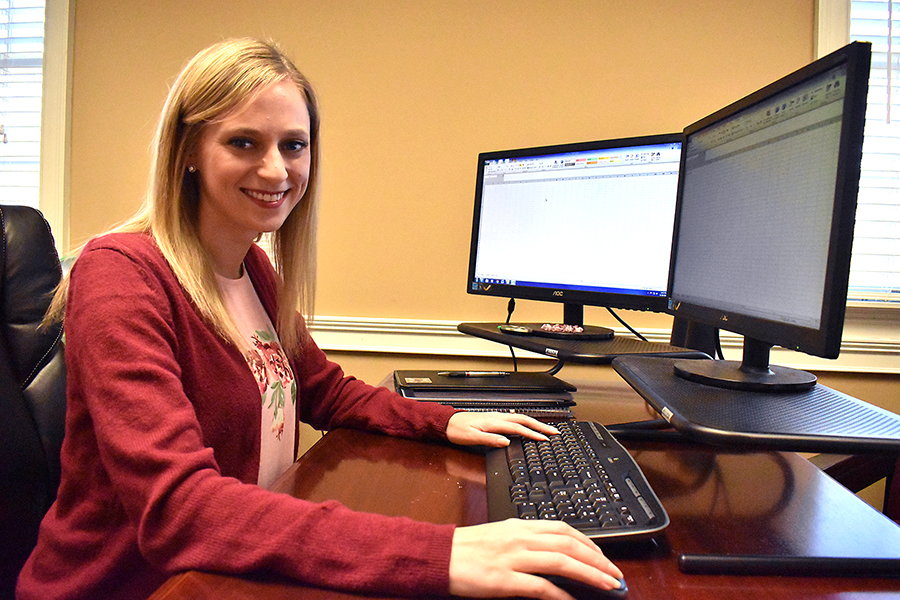 At age 22, this Roane State alumna has her own office in the financial headquarters of a local bank, along with huge responsibilities as the bank's controller.

"She's smart, she's got a great work ethic and a completion-of-task mindset," TNBank President Tom Tuck said of Sarah Robinson. Tuck said Robinson's duties include "making sure of the integrity" of the bank's record-keeping.

Robinson, formerly Sarah Nickle, prepares financial statements and regulatory reports for the bank, which has $200 million in assets and four branches along with the main office at the corner of Rutgers and Illinois avenues in Oak Ridge.

"I love it. I'm so happy that I came here. It's a great place to bank and work," said Robinson. "I'm glad to be back in my hometown. I love living and working in this community."

The story of Robinson's education and job success is an account of how the bank worked with her at several stages in her life -- as a part-time teller while finishing Oak Ridge High in 2013, later while she went to Roane State, and then as an intern while pursuing a degree in accounting at Brigham Young University-Idaho.

She graduated from BYU-Idaho in April 2017 and began her controller's duties at TNBank last June. She's the daughter of Lee and Beth Nickle and recently married T.J. Robinson.

"It's not unusual for us to have a Roane Stater in here," Tuck said of TNBank, which has 56 employees. "We believe in the Roane State experience."

"I really enjoyed that I had smaller classes at Roane State and professors that were willing to help and really mentor me," Sarah Robinson said.

She said she took advantage of the Tennessee Achieves (now Tennessee Promise) last-dollar scholarship program while at Roane State. "That helped me to stay at home and work at the bank."

While at Roane State, Robinson said the bank accommodated her class schedule. She took classes on Mondays and Wednesdays and worked at the bank on Tuesdays, Thursdays and Fridays. She received her associate degree in business administration in 2014.

While pursuing her bachelor's degree in accounting at BYU-Idaho, Robinson was able to return to Oak Ridge for an internship in TNBank's accounting department. Her mentor there was Mark Holder, executive vice president and credit officer.

"Her intelligence and work ethic were apparent from her very start as a teller, throughout her accounting internship in 2016, and in the first few months of her new endeavor," Holder said.

England said, "Like a true hometown bank, we like to promote from within and take care of our own."