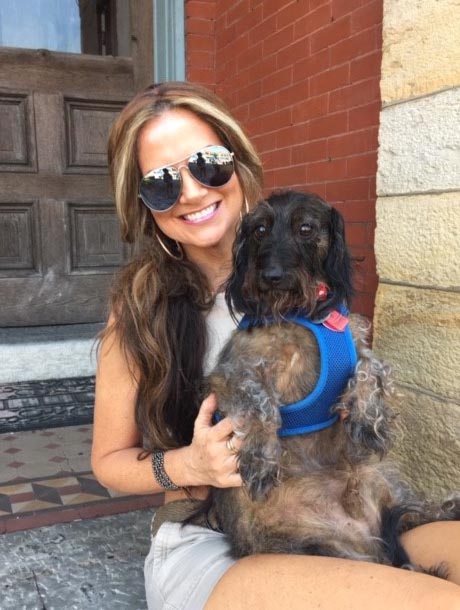 Melanie Stanley and her wire haired dachshund, Stewart Douglas Stanley. The dog has become something of a social media celebrity.

A Roane State alumnus, now an employee at the community college’s Morgan County campus, is the self-proclaimed “mom” to a dog that’s become something of a global celebrity.

“He is so lively and such a ham for the camera,” she said. “He knows how to roll those big brown puppy dog eyes at you, and you just melt. He’s the most loyal, loving creature you’ll ever meet, and he follows every step I take.”

The dog’s Facebook page, created of course by Melanie, has more than 11,000 followers, and a feature about the canine appeared on the front page of a recent edition of The Morgan County News.

The dog also has a presence on Instagram and Twitter, where he’s followed by such celebrities as Ben Bailey, host of the game show “Cash Cab,” and true crime author Diane Fanning, who has been on the Investigation Discovery Channel.

Fans from eight other states that have followed Stewart Stanley on social media have dropped by Melanie and husband Joe Stanley’s residence to meet the furry celebrity. “It’s almost a full-time job to do his social media,” said Melanie. In her spare time, she said she responds to every message posted.

Melanie has written a book about the pooch titled “Stewart Stanley – the Adventures of a Tiny German Dog” that’s available on Amazon, and a woman who teaches English as a second language purchased 15 copies to use in her classes, Melanie said.

“Stewart is more than just a dog,” a back-cover description of the book states. “He’s a compact version of who we all want to be. He finds joy in the moment and loves with his whole heart.”

Melanie said the dog was sold for $15 on Craigslist to a friend in 2012 who decided the care and feeding of an animal was too much. He was about to be placed in a shelter when Melanie met him. It was love at first sight.

Melanie and Joe Stanley have taken thousands of photos of the dog, and images of him are prominently displayed on Melanie’s workspace just inside the main entrance to Roane State’s Morgan County campus.

Melanie has been the secretary/receptionist at the Morgan County campus since it opened in 2008. “Kids say our campus is the best,” she said. “That’s because we are a small campus with a family feel. We have students that graduated years ago that come back to visit.”