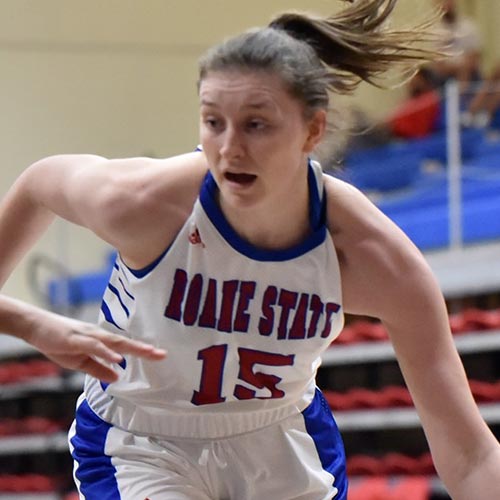 The Lady Raiders jumped out to an early lead and by the end of the first quarter held a five-point advantage. Columbia State fought back in the second stanza taking a 27-26 lead in the final seconds of the half on a Mya Byrd three-pointer, which gave the Lady Chargers their first lead of the game and a one-point halftime cushion.

In the third period, Roane State regained a six-point lead, 34-28, only to lose it with 29.2-seconds remaining in the quarter, 40-37, on another Byrd three-point bomb.

On the Lady Raiders’ ensuing possession, freshman guard Tyasia Reed buried a three-pointer at the buzzer to knot the score at 40 going into the final frame.

The Lady Raiders tied the game at 46 with 6:07 to play when freshman Brooke Christian scored on a put-back from the paint. Then, with 5:38 showing on the clock, freshman Kirby Brown connected from beyond the arc to give the Lady Raiders a three-point advantage, 49-46. After that, Roane State – backed by a solid defensive effort – never looked back.

After the game, head coach David Harnish said, “I thought it was kind of what we expected a little bit working with a whole new group of kids. Basically, we have one sophomore and tonight it was the other eight freshmen.”

The nation’s fourth-winningest active coach, who picked up career win 778 added, “We made a lot of freshman mistakes, but I think the good thing about it was that we settled down in the fourth quarter. I thought that finally, defensively, we played straight-up and made better decisions offensively.”

Roane State takes their 1-0 record on the road this Saturday for a re-match at Columbia State. That contest is slated to tip-off at 3:00 p.m. EST / 2:00 p.m. CST. As no fans are presently permitted in the gyms, information on live streaming will be available on the college’s web page, roanestate.edu/athletics and on the athletics Twitter account, @RSCCAthletics.

As sports return to Roane State, it’s also important to note that stringent testing and safety protocols from the NJCAA and subsequently the TCCAA have established rigid standards for these competitions. A recent message from the TCCAA to member institutions stated: “Despite the extensive planning and precautions that have been taken… COVID-19 has created situations where we must remain fluid and act accordingly in the best interest of the safety and health of the TCCAA student-athletes.”

Roane State will continue to monitor the latest guidance from its governing bodies and health experts in order to make the most appropriate decisions for the safety of our students and staff.