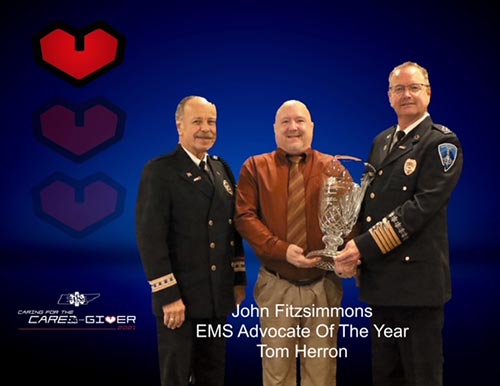 Roane State’s Thomas Herron knows first-hand the trauma that EMS personnel can experience as part of their jobs.

Twenty-four years ago, he and a partner responded to an emergency call for a 9-year-old who did not survive. “I knew it bothered me, but I never realized how deeply at first,” Herron said.

Then, in March 2019, he learned that his partner from that call had taken their own life. A note was found that “mentioned me and that call,” said Herron, a Roane State assistant professor and clinical coordinator.

The incident was seared into his psyche, prompting Herron to launch a campaign to make EMS personnel aware of the “exploding problems with mental health issues” also faced by firefighters and law enforcement personnel.

As one result of his efforts, Herron has been named the 2021 “EMS Advocate of the Year” of the Tennessee Ambulance Service Association. He was honored with a crystal trophy, $100 and other awards during the TASA mid-winter conference in Gatlinburg.

“Tom is the quintessential advocate for the profession of EMS, and more specifically for the State of Tennessee,” Blevins wrote in his letter nominating Herron for the honor. “He looks for ways to engage people in all levels of EMS.” In the letter, Blevins also praised Herron for his “caring and compassionate attitude.”

Herron “is an advocate for mental health resilience in our profession,” Blevins wrote.

Herron has urged the state EMS director “to make mental health resilience a key focus in the upcoming years,” Blevins’ letter states. Herron said he is seeking to “integrate mental health awareness into all EMS programs.”

He’s also a leader in the REBOOT Recovery program, an organization that helps people overcome trauma through faith-based programs. He leads a special course for first responders struggling with Post Traumatic Stress Syndrome.

He also works with 10 area hospitals and 15 EMS agencies, overseeing coordination of required clinical programs for EMS students. Herron has been with Roane State for nearly six years, and he was also the instructor for the community college’s spring paramedic cohort.

He said he’s seeking public awareness of “how essential EMS personnel are in the community. We’re making sure we’re getting good EMS providers out on the street.”