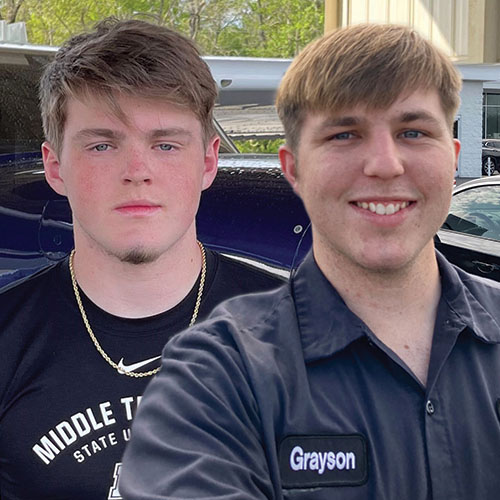 These brothers are on very different paths but both launched their bright futures in Roane State’s Middle College program.

Grayson Terry, 21, is the youngest BMW service technician in the region, while Garrison Terry, 18, is on track to reach his goal of becoming a commercial airline pilot by the time he’s 22.

They are the sons of Gary and Gena Terry. Gary Terry is an assistant principal, athletic director and assistant head football coach at Anderson County High School. Gena Terry is a special education teacher at the high school.

Middle College is Roane State’s innovative program where high-achieving high school students can start taking the community college’s courses when they’re juniors and then graduate from high school at the same time they obtain a Roane State associate degree.

The brothers are enthusiastic Middle College supporters who are determined to succeed in their respective fields.

They completed their high school graduation requirements as sophomores and returned to campus to play football. Grayson also played baseball. During his high school gridiron career, Grayson was named to the all-state team for academics, while Garrison made the all-region team last season.

They both give top marks to Roane State Assistant English Professor Margaret “Maggie” Bouldin. “She knew about us and how we learned things,” Grayson said, referring to Middle College students. “She went out of her way to make sure we were learning.”

“I really enjoyed all of the classes we had there [at Roane State].”

Grayson decided not to continue on the collegiate path. Instead, he recalled how much he had enjoyed working on his father’s BMW vehicles and began looking into a career in the automotive field.

He said he developed customer relations skills working part-time as a porter at Grayson BMW in Knoxville. That job entails retrieving and returning customers’ cars.

That led him to win entry into the BMW STEP (Service Technician Education Program). That is an intensive 50-week course at the Universal Technical Institute in Orlando, Florida.

He was rehired, this time as a service technician, at Grayson BMW in October 2020. “I really enjoy the work,” he said. “You get to work on expensive, nice vehicles all day every day.”

Garrison, who started the Middle College curriculum in August 2020, said he frequently flew on commercial airplanes to Orlando to visit his brother while Grayson took the BMW service technician courses. Garrison said those flights ignited his interest in becoming a pilot.

He’s already obtained a pilot’s license for flying small airplanes and plans to enroll in the aerospace program at Middle Tennessee State University after his time at Roane State.

Due to the pandemic, Garrison’s courses were online last semester. He said he initially enjoyed virtual learning, but added that he felt “ready to go back to the classroom.”

Garrison extended his thanks to David Lane, the former director of Roane State’s Middle College program, for helping him with the enrollment process.