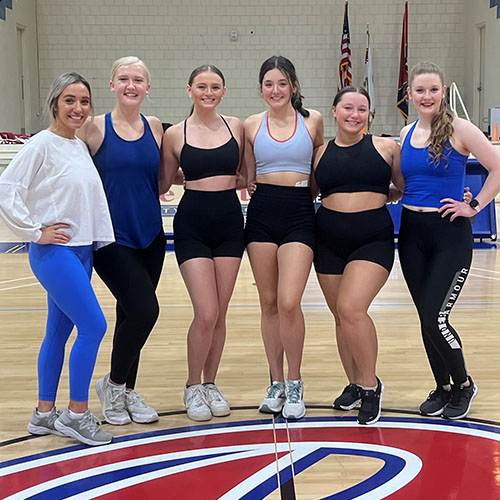 A new feature for Roane State basketball tips off this season with the addition of trained dancers performing on the sidelines and during halftime of home games.

They are the five members of the Raiders’ spirit squad and were selected after recent tryouts. The team is made up of Gracee DeJarnette, Alyssa Emory, Allison Monroe, Elizabeth Brady and Megan Cundiff.

“They should add a new and enjoyable element to our basketball games,” Roane State Athletics Director David Lane said.

The squad is coached by Ashley Thompson, a physical education teacher at Highland Park Elementary School in Lenoir City. She was a member of a dance team at Tennessee Tech, where she just completed her master’s degree in physical education, health and wellness.

“I have been looking to start or coach a dance team, and I saw that Roane State didn’t have one,” said Thompson, who teaches hip-hop dance moves at Arts in Motion in Kingston. She’s married to Tyler Thompson, who played basketball for Roane State and Tennessee Tech.

“She brings knowledge and experience as an instructor and a former dancer and cheerleader,” Lane said. He and Thompson worked out plans for the new team.

She said squad members will perform several types of dances, including hip-hop, “pom,” and “there could be some jazz.”

The new sideline entertainers are expected to premiere on November 1, when the Lady Raiders host University of the Cumberlands, and return the next evening when the Roane State men’s team takes on Bryan College.