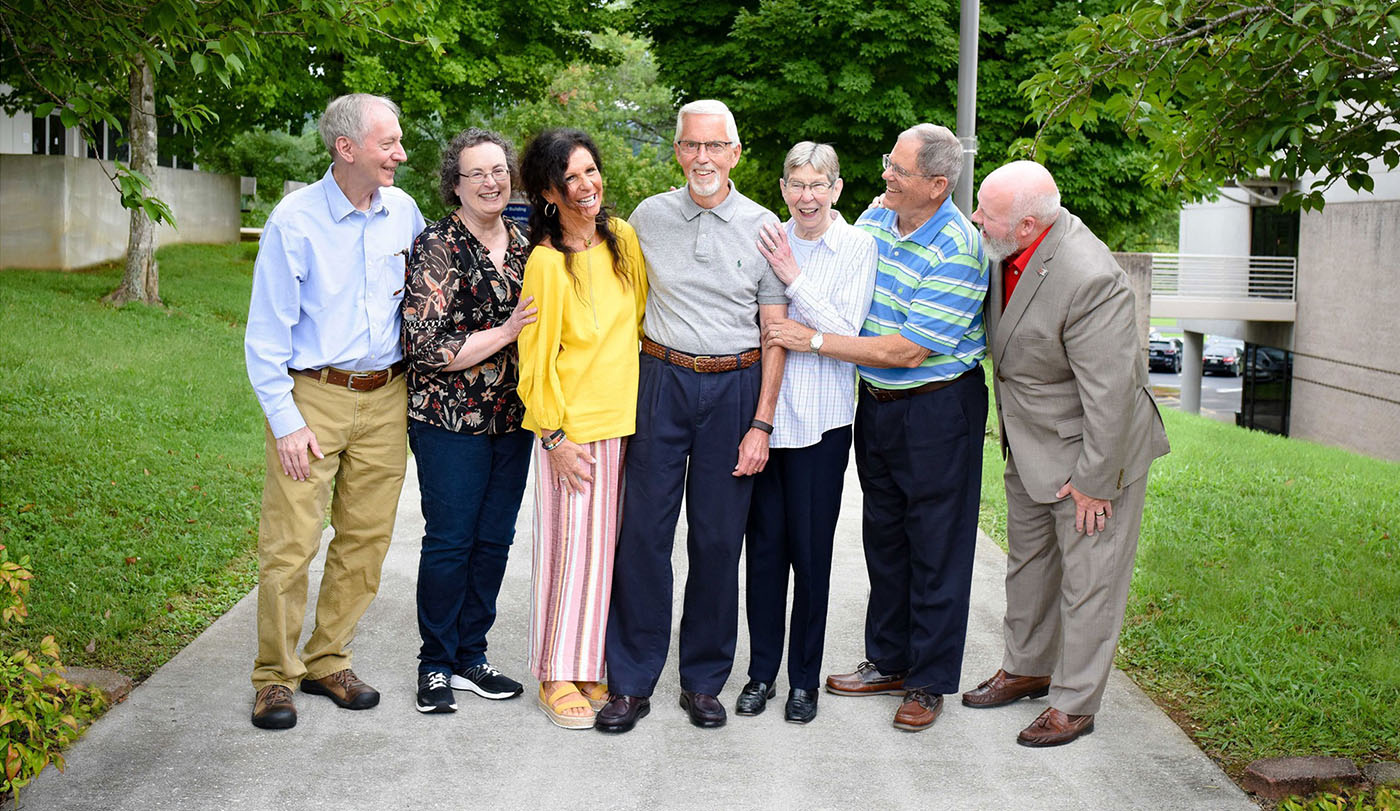 Roane State honored Gary Heidinger for his 50 years of service to the college with a special recognition during Fall Convocation. Pictured left to right on campus following that event are Don and Tamsin Miller, Pam and Gary Heidinger, Pat and Bruce Fisher, and RSCC President Chris Whaley.

Gary Heidinger says even after 50 years, he’s still a bit anxious and excited on the first day of each fall semester at Roane State Community College.

If he ever becomes nonchalant about that event, it may be the signal that it’s time to step away from his life’s work as an educator, he said.

“As long as I still enjoy teaching, I’m going to stick with it.”

Heidinger, 80, an associate professor of sociology and anthropology, is the college’s longest serving faculty member. He was recognized during August’s convocation for his love for Roane State and its faculty, staff and students.

“Gary has not only had a profound impact on a generation of Roane State students but has served as a friend and mentor to the faculty who have followed in his footsteps,” Roane State President Chris Whaley told commencement attendees.

Heidinger has been with Roane State almost from its start, when the fledgling institution had classes in all types of buildings, from churches to former elementary schools.

“During my first year at Roane State (1972-1973), I taught most of my classes in the education wing/building of the South Harriman Baptist Church,” Heidinger said. “We were more or less flying on a wing and a prayer.”

“I didn’t even have a chalk board in my classroom during fall and winter quarters,” he added. “My ‘office,’ which I shared with two Humanities instructors, was what was once the kitchen in an old two-story grey house adjunct to the church. Approximately 15 Humanities, Technology and Business, and Social Science faculty, along with staff, were housed there. In that we had to share one restroom, we all learned the value and importance of sharing and flexibility.”

When he reported for his first day on the job at Roane State in September 1972, Heidinger said he was stunned to be offered the chairmanship of Roane State’s Social Sciences Division, a post he held until 1979.

During the early 1970s, he and many other faculty members moved into the Dunbar Building, named after Roane State’s Cuyler Dunbar, the institution’s first president.

In the early years, faculty offices were small and open cubicles in two large rooms, making privacy rather difficult. “My cubicle and classrooms were located on the third floor of the building. Unfortunately, my classrooms had a number of leaks. Over time, I became rather adept at scrounging up all manner of containers to catch the leaks. They sometimes outnumbered the students in my classes.”

As the community college grew in locations and enrollment, “the faculty increased dramatically,” he said. So did academic programs, with nursing, business, computer science, dental hygiene, physical therapy, and a variety of business-related programs added to the curriculum. He’s proud of “how expansive we became in terms of program offerings,” Heidinger said.

At one point, when Tennessee’s community colleges were being established, Roane State had been projected to be the state’s smallest such institution in terms of enrollment.

However, it became the state’s biggest in the 1970s with an influx of Knox County students. That trend vanished with the opening of Pellissippi State’s Hardin Valley campus.

A key event leading to a longstanding tradition that continues today was launched in June of 1977 when Heidinger co-created the Southwest Field Trip. That’s an annual summertime excursion for students to points of interest in the Southwest’s Four Corners Area – parts of Colorado, Utah, Arizona and New Mexico.

Many students previously hadn’t been farther west than Nashville, Heidinger said, so it was interesting and rewarding to see how they reacted to the western environment.

“The experience transformed students,” Heidinger said. “Some came away from the field experience with refined or clarified life and career goals.”

It’s been very gratifying to see former students going on to do great things, Heidinger added. For example, he said, two current members of the Roane State faculty, Dr. Julie Hall, a professor and director of radiologic technology, and Dr. John Brown, who teaches courses in political science and history, were student participants in the Southwest Field Trip.

Teaching at Roane State has given him “the opportunity to interact with talented, enthusiastic, creative, conscientious and hard-working colleagues who are devoted to their craft and enjoy working together serving students,” Heidinger said.

He and his wife, Pam, live in the Farragut area and have two grown sons, Ross and Logan. “When I began my instructional/teaching career in 1965, had someone informed me that I would still be teaching 57 years later, I would have considered such a prediction to be completely baseless, if not downright insane.

“But it’s something I truly enjoy.”