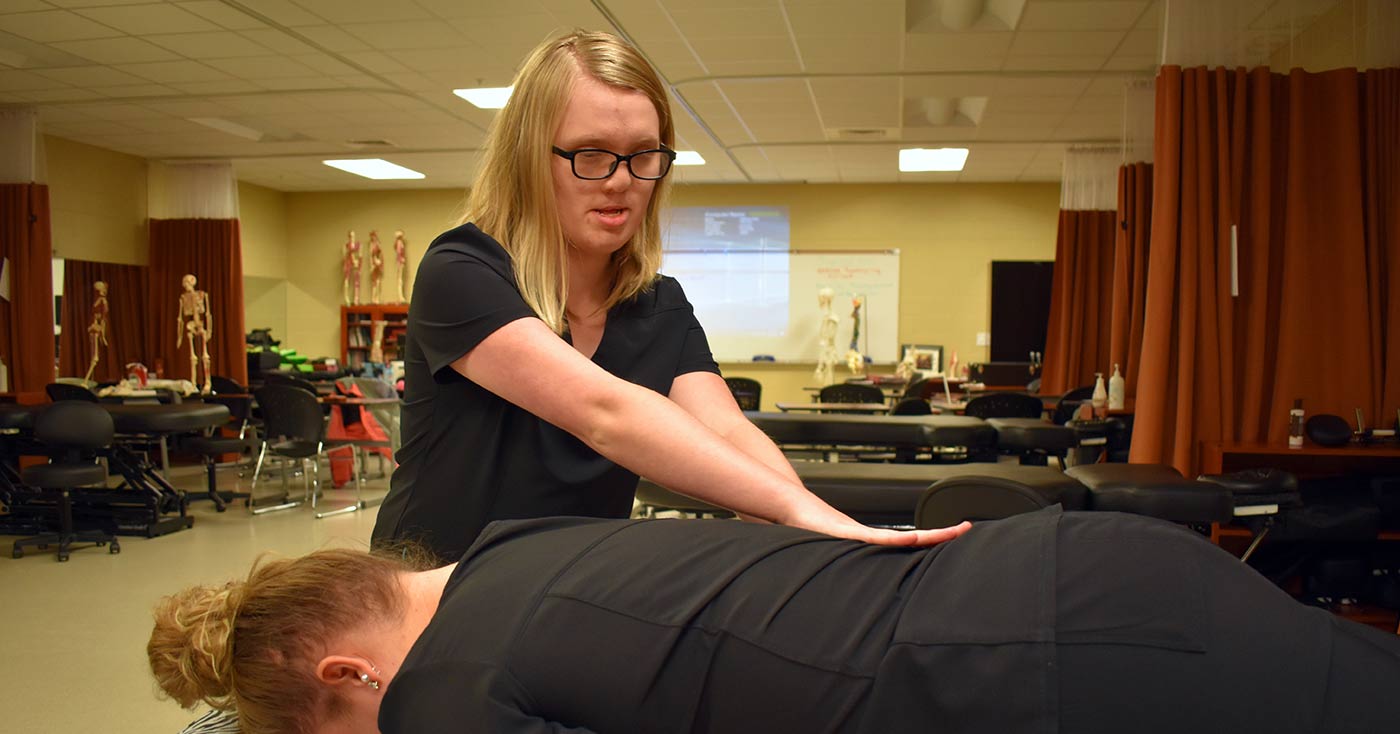 Blind since she was 6, Harley Sharpe practices massage on another of the students in Roane State Community College’s massage therapy class.

“You definitely get that feeling that you’re family,” the 20-year-old says.

Yet both during class and in public, Sharpe says she sometimes gets the impression that “people are almost scared to talk to me.”

“I don’t want people to be afraid to come over and speak to me and ask questions,” said Sharpe. “That’s the only way you can be educated on the topic of blindness.”

Sharpe has been blind since she was 6 years old. Just don’t call her visually impaired. “I’m sightless,” she said. “Being called blind doesn’t bother me unless it’s used in a negative way.”

Sharpe and her mom, Julie Smith, have been making the 90-minute drive from their home in Oneida to take the Roane State class, which meets most of the day three days a week. She’s the first blind person to take a Roane State class in massage therapy and the first in the college’s health sciences division.

Her interest in massage started early. When she was little, Sharpe said her Mom would ask her for a massage when her back ached, “and as I got older, I started moving toward that direction,” she said of her interest in that therapy. “I’ve practiced on family members and friends.”

Sharpe, who graduated from Oneida High School in May, said she considered various Roane State class options online with the help of a Braille reader. “I found it (massage therapy) and said yes, this is what I want to do.”

“The college officials have been helpful,” Smith said. It also helps that the class meets in a fixed location on the west end of the Goff Building on Roane State’s Oak Ridge campus, Smith said.

“Everything we asked ‘Mr. G’ (Prof. Genna) or his assistant Susanna Grove for help with, they have accommodated,” Sharpe added.

“’Mr. G allows me to bring in a voice recorder,” Sharpe said. “While he’s lecturing, I’m able to record him. When I get home, I listen to the lecture and then type out notes into Braille on this really cool Bluetooth Smart Beetle.”

Students concentrate on anatomy studies two mornings a week and study law and ethics as they pertain to massage therapy on Friday mornings. On Friday afternoons, the students study massage procedures for special populations.

Hands-on practices in Swedish massage occupy Monday and Wednesday afternoons. Many think those who do massages have to mainly deal with aching hands, but Sharpe says the required posture – a lunge-like stance – is just as tiring.

After she obtains her certificate, Sharpe said she hopes she’ll be working in a salon. As for her being sightless and taking massage therapy, “I’m excited that I can open up doors for others,” she said.