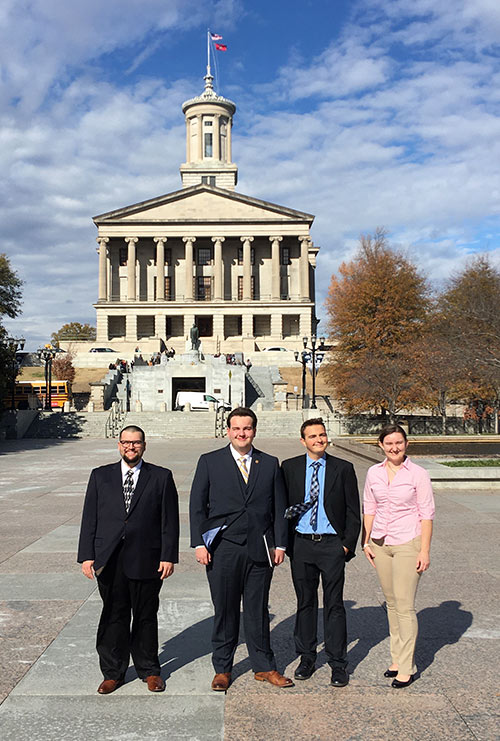 It marks the sixth year in a row that Roane State students have been honored during the event, said John Brown, a Roane State associate professor of political science who serves as the advisor for the group. Several hundred students from 40 state colleges and universities attended, Brown said.

The Tennessee Intercollegiate State Legislature is a forum for students to exchange ideas, express their opinions and learn how government works.

Roane State student Eli Anderson, 19, is Tennessee’s youngest elected official after winning a Morgan County Commission seat in 2018. He was recognized as an outstanding representative during the mock legislative session, held in the state senate and house chambers. Anderson is also president of Roane State’s Student Government Association.

Jacob Hughett, 20, who lost his bid for Scott County Commission by a mere 61 votes in 2018, was named the best state senator during the November mock session. “He (Hughett) is very, very articulate,” Brown said.

Also attending were Roane State students Jesse Griffin, who served as a state representative, and Anna McClure, who portrayed a gun rights lobbyist.

The contingent “was one of our better groups,” Brown said, “and we’ve had pretty good success in years past.”

The event included fictional versions of all of Tennessee’s constitutional offices, from governor to secretary of state. “It’s as close as you can get to a model of the state legislature,” Brown said.