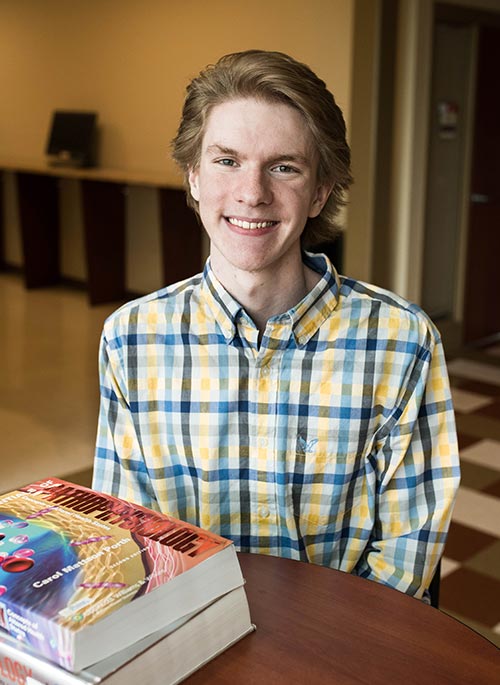 Roane State student Journey Long has been interested in video games for as long as he can remember. He said he was around 4 or 5 years old when he started thinking about designing games. “It kicked my little kid mind into overdrive,” he said.

It’s not surprising that Long would rank the college’s director of computer information technology, Dr. George Meghabghab, as his favorite instructor.

Long said he chose Roane State because he lives close by in Harriman and was told that “it has a good reputation for beginners.” He was home-schooled and had never before been in a public school setting.

Long, who just graduated in May and kept a perfect 4.0 grade point average, said he hopes to also finish the college’s cybersecurity program.

While his focus is on computers, Long said he was surprised with a general education course titled “Introduction to Ethics” taught by Donald Dillard. “I had told my Mom I was dreading the class. I thought that it would be tough, but I actually really enjoyed it.”

Long has also been a participant in the Skills USA competition, a nonprofit preparing students for technical and skilled service occupations. He designed apps, including one that calculates how much exercise would be needed to burn off calories eaten in a typical fast-food meal. It would take 3.7 hours of jogging, his app estimates.

For his communications course with Dr. Matt Waters, Long researched the effects that Tetris-style games have on the brain and prepared speeches on his findings. “I picked this topic because Tetris is a game I’m very experienced with, and I’ve personally seen the positive effects that the game can have on the brain. I would play two or three matches of Tetris prior to starting college course work as a way to ‘warm up my brain.’”

With his background and educational interests, it’s natural that Long wants to design video games and perhaps work for one of the major companies in that field.